There's nothing like fuzz live. A great guitar wave sizzling and crackling, like a tail of fire whipping the crowd across their collective faces.

My current sound is produced by the clean channel of a Blackstar HT5 (which I will be micing to compete with the drums at the release), and a Timmy surf green overdrive pedal most often at around 11 o'clock. I love this tone for anything from a volume cut tremolo crystal string sound to a slightly fizzy aggressive sound. However, for a few songs on the new album, I have been in want of a kick azz fuzz.

So, as usual, problems abound. 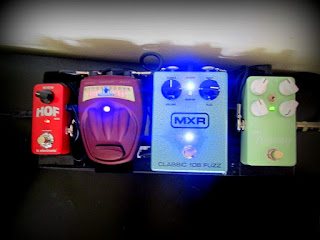 I use a Morley wah pedal for several songs as well, often times in the same ones I want the fuzz box for. Unbeknownst to me till recently though, fuzzes and wahs don't play well together (well, most as I was to learn).

The fuzz pedal is a relatively low impedence pedal, meaning it takes the line level signal of the guitar and is hyper sensitive to it in order to generate its tone. The wah on the other hand, puts out a high impedence signal. Both pedals like to be the first in the chain, the first the guitar plugs into. Typically, and optimally for the wah pedal, it goes first. You'd run the guitar cord into the wah to get the full sound sweep, then the wah into your other pedals (in the case, fuzz).

Fucking everything, right? Well, after hours of research, I have found the best options (there are others out there that all have caveats and I won't list here.) I'll tell you what I did. And this may not be perfect for everyone as it requires a specific fuzz pedal. But for me, I love the sound of this pedal.

Ended up getting an MXR classic 108 fuzz pedal. It has a built in buffer switch, which allows pedal to correctly temper the sounds for the fuzz. Solved! And, I love the sound of the overdrive and the fuzz mixed together. It really allows me to taper my sound to exactly what makes me happy for each song with minimal fuss (usually a pickup change and volume cut on the guitar is all I need).

Moral is, always learn and research, never assume. Hopefully before you spend the bucks.