Been working on my newest album. More details to come on that, but I've been auditioning all the mics in my stable to find the perfect tool for the job. In the past I've usually just taken my most expensive one at the time and gone with that. I know that's a terrible way of approaching things, but I fell victim to the  "I must get the most of what I paid for" maxim. This time however, I am actually being smart about the whole affair. 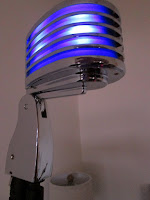 So, I took one of my newest songs, an R&B number in the style of Michael Jackson and tried each mic on my voice at different distances, with the only effects being a noise gate and a bit of software compression. Here are the results.

Heil Fin (near) - The mic had an awful lot of proximity effect. I couldn't seem to manage it - With every open variation of my mouth it seemed to have a different eq curve.  It has a great sound reproduction - bright and crisp, but overall a bit thin. Excellent for micing the acoustic guitar however.

Hell Fin (far) - Still some mic proximity effects, but much less. However, in order to minimize them I got pretty far away from the mic, and at that point there was too much air in the sound that I couldn't seem to adjust well with EQ. I've determined this is a great live mic and excellent for instrument micing, but not my favorite vocal recording mic.

MXL 990 - This to me had a more full sound than the Heil. An excellent overall reproduction that wasn't too finicky. It sounded somewhere between a condenser and an SM58. 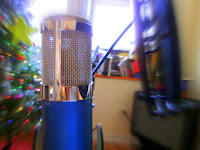 MXL  4000 - This has a nice overall tone, a full sound a bit bright, but really sensitive. I couldn't seem to compress it well as it was too spikey. Good for me doing very controlled, whispery type vocals, but surely not right for rock. I had to sing too self aware to make it usable, killing the vocal feel.

ATR 30 - For what I considered an old throw away mic, it was surprisingly decent. Overall a bit flat and missing some high end, but in a way it sounded kinda vintage. Decent low end.

SM 57 - To me, with my voice, it sounded a bit thin and a tad crispy in the high end. Clear sound. Could see using this for harmony or gang shout/backing vocals.

SM 58 - As expected, good all around. For me it was missing a tiny bit of fullness and that nice crisp sound you get from a condenser.  Didn't quite pop the way I wanted.

The winner. MXL 990. I had kinda written this little mic off as I bought it years ago and at the time I didn't really spend much time with it. However, when doing the roundup (and bearing in mind it's my specific voice), it consistently captured the feel I wanted. I tried it on rock, ballads, blues, etc. and so far it has been up to all tasks marvelously. The only thing I haven't tried is highly aggressive vocals, but if it falters I always have the shures to step in.

See All
And now

Monday, February 26, 2018 After New Orleans, after months of re-mixing, re-mastering, learning, indecision, and so on, I have started recording my first new song in many long months. In that time I ha

Still from the short movie shoot

The Creative Process & Setting up a Logic Pro X Template