Album Release - Working through the mastering

So, following up on the mixing. All the songs are mostly mixed. I say mostly as it's a process of mixing on monitors, then listening in studio cans, ear buds, car speakers, computer speakers, taking notes on what is off on different playbacks, going back, tweaking, and repeating the process for weeks. But, at least I am in this part of the process. I see a light. It's funny (or sad) thinking you have to mix to account for most people listening on stock white apple ear buds, but you do. When I was younger I only really cared about making things sound good on my headphones, which obviously is pretty stupid, but I will say as an artist it is hard to let the producer in you cull some of the full spectrum to let the mixes play nice on bargain equiptment. Or maybe I am just doing somethings wrong. Anywhoo. 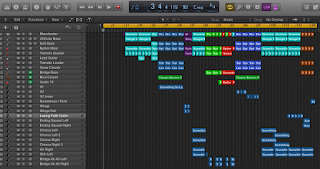 For mastering, I am using iZotope Ozone. It's a fantastic tool with many usable presets as jumping off points. Currently I am finding a cohesive overall EQ curve for all the songs. I have most points nailed down and luckily most songs are in the same general spectrum. A few I have to massage the EQ and do some low end roll off, but for the most part things are where I want them. The most valuable lesson I have learned over the last few years is to tame the low end /bass of all the tracks. If you have ever wondered why your mixes sound muddled, it's often way too many tracks with excessive low end competing and masking each other. I had the notion that things would sound massive if you kept the full guitar spectrum/etc, but in reality I was making it sound flat and less pronounced since it wasn't given it's proper space. When I was younger I would boost treble or add gain to try to get things to sit better, often times making things much worse. Seriously, use that EQ and focus on each track. Does your vocal/drum/guitar/even bass need all that low end?  Remember that the sound spectrum is finite and each track needs its own address along the block.

Man, compressors can be so confusing. I spent weeks taking courses (and have done this most of my life and I still feel like a beginner) on really understanding how to use compression ratios, types of compressors, etc to not truly squash the sound and get things loud enough to sound somewhat modern. Pain in the ass. I find myself going for crazy ratios like 20:1 (which doesn't even exist in ones like optical), so I am getting there but still alot I don't quite get. However, I am mostly getting there. I think.

Also, the stereo expander is a mind fuck. It goes like this. Turn it on and adjust your spectrum. Every time I go "Holy Shit!" when I hear how it seperates the bands across your head. So I bump it a little more. Then a little more, like an addict. Then it sounds like shit. And I have lost all sense of reference. So there's another hour and I am back to square one. If I had the money I'd hire some help.

Anyways, back to the mixes. Trying to keep my ears fresh.

"Life of a Cat", Max animation

Please view this post to see the links. He's working tirelessly at becoming a better and better artist. Amazes me already. Check it out, follow the little guy. Every single person who pays attention m