I am done with cancer

The fight is over.

It was six months of my life, at times a waking nightmare. What a horrible disease cancer is. But, my treatment has concluded.

Chemo effects are cumulative. I was aware of this going in, but really, I don't know how you could prepare for them academically. On the night of the first treatment, I remember Marina, Max and I took a walk to the park. I felt a bit off, but proud to be out and in the real world during treatment. This was day one. 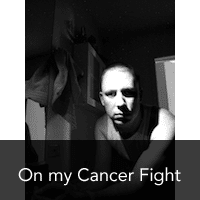 There was so much I didn't know about why exactly chemo was dangerous beforehand. Chief amongst them being (as I was to learn about 8 days later) the destruction of white blood cells. The infection fighting cells. It was around 7 pm the Saturday night following the end of my first cycle that I started to feel warm. Now, it was hard to know what exactly I was feeling, as one of the main side effects for me was the disruption of internal/external temperature perception. I was always too hot or cold, skin was burning but toes frosty, maybe abdomen on fire internally, or maybe just mentally. That Saturday, it was a real fever, and my excellent oncologist, Dr. Karides, was very firm about heading straight to an emergency room. There is a period, about 7-14 days after a major week of chemo, that your body's immune system is comprised. So I was ushered quickly, with turquoise breathing mask trapping my hot breath against my cheeks, past the other emergency room clientele. I would spend 2 nights on heavy antibiotics and limited sleep reserves. Neutropenic fever is what I would get again after the next cycle as well, and again spend another few days in the hospital waiting as they tried to culture any infections I may be harboring. Luckily I was fine both times with no need to be quarantined. It took it's toll mentally though. Those were supposed to be my "chemo weekend" recovery periods. It was just a different flavor of hospital time.

Back into the second cycle, things started to get much rougher. For my regiment, a cycle of BEP chemo is an 8 hour / 5 day plan. It would begin to add up, the symptoms and toll it was taking on my body. The usual hair migration occurred (of which the eyebrows were sorely missed) and weight melted drastically. It seemed as time went on all I could bear to do was lay in my bed, fearing all things odorous. Car rides back and forth left me ill. Luckily my family and friends were amazingly supportive, as was employer, Page Foundry. I seriously owe some kind folks. But there was no time for that. Chemo was all consuming now. Things blurred slowly. I had to watch and feel everything.

At the end of the final cycle. The next four days were the hardest of my life. My bones felt like they were turning to hot sponge inside my skin. My skin in turn was leathery and red and felt stretched beyond comfort, and hot. When I would try to stand, all the blood would drain instantly and things would go dark/faint. I never did faint. And, as a seasoned drinker, I thought the nausea would be manageable given that I have woken a few times under a bender, but this was different. Some sort of hellish chemical hangover that introduced a new level of nausea. I started to hate looking at myself in the mirror. Not because of how I looked. Just because.

But, the chemo eventually concluded, and I had to get a scan to see if it worked. I was so nervous as we waited in the office for the results that somehow I knew I wasn't done just yet. And, I wasn't. The mass, initially 6.5 cm, had shrunk to 2.1 cm. It was encouraging, especially considering my blood markers were back to normal, but it was still a bit too suspicious to leave resident. I would have to have surgery. I nearly cried in the office.

Meeting with Dr. Brown, my urologist/surgeon, left me a wobbling mess of chemo burnt nerves. He is an excellent doctor with technique and bedside manner, but is also quite serious/direct, and he let me know that this could be a tricky operation. I had already had the RPLND surgery and it left behind scar tissue footprints, and chemo always gummed up one's internals. I was scared shitless.

Over the next few weeks, I had much preparation to do. Donating my blood autologously in the case of a blood transfusion, having various tests, bringing up iron levels, etc. When the day of surgery finally came, I was so tired on the drive in that I wasn't quite as nervous as I thought I may be. Everything was dark and quiet and early, Marina so comforting. Things went well. A painless IV insertion and soon I was waiting to enter the surgery area. I plead my case for early anesthesia and my wish was granted. I went under, and was awoken soon without hitch. Everything was well. Technically.

Damn surgery hurts. The next day, I awoke shocked by the pain, wondering how I ever got through the major surgery 6 years prior. Then it hit me. Narcotics.

The human body is incredibly resilient. Each day, I was amazed by how much better I would feel. And, I was inspired by my kindly 86 year old roommate who just had similar surgery and was quite spry (luckily without a chemo history) I went in on Wednesday, and I would be going home on Saturday afternoon.

When my doctors came to see me, they were flush with good news. I was done with treatment. The mass had shrunk even more since the scan, and what was left was a shell of dead tissue with a microscopic grouping of ensconced seminoma cells. Since everything was shelled in dead tissue and microscopic, there is no need for more treatment. I am done and need to recover. Ouch...

My whole life, I’ve found it very hard to passively enjoy most anything artistic. Enjoy in the sense that somehow I don’t interpret it as some divine calling to me to create. To just appreciate withou

270
From a middle chapter

When someone you love dies, your current language expires. First thing to go is the tongue. Then, all treasure you buried rots. And curse the man who seeks to plunder, for they were spoken for. When s

230
Some scribbles from New Orleans

Friday, April 14, 2017 Bourbon street, one long back alley. Bring out your dead, your proud heathens, and your wound up weary travel toys. Bubbles logged in the fetid air, from unseen windows, despera