And there we were, standing in the world’s northernmost capital.

Iceland made my me feel fresh and relevant again. It felt like fair trade, mentally and physically. Our days were hard spent exploring a fledgling piece of land violently sprung from the bowels of the Earth's core, and then, our nights tapered by genuine pleasant exhaustion, organic food, and timeless inquisition.

I felt good. My mind felt sharp. No bullshit questions or dwindling grasps for my youthful artistic or philosophical meanderings. All my senses met me at this turbulent land. I was unknowingly inquisitive again, without restraint or inhibition, and with seeming global awareness. Everything was fascinating, and reachable. It bled natural reverence and quiet invitation with troll like rocks and hidden falls that played hide and seek with man. It felt truly good to feel trusting and connected to strangers again. We even escorted a hitchhiker for a hundred or so kilometers. No worries here.

So little paved road. Almost no billboards. Just 4 T.V. channels. Hours of solitude and silence, yet so much diverse terrain ; sometimes so violent. All my personal belongings distant.

We arrived in Reykjavik at about 9 am, Icelandic time, 4 am Chicago time. I quickly grabbed a cigarette in a dank little room just outside of customs inside Keflavik airport. The room was covered in soot, it's inhabitants blended well. A man sat with me briefly and attempted a few English words after unsuccessfully engaging me in his native tongue. I smiled and smoked the rest of my cigarette in peace. Soon, we emerged into eternal dusk.

The world outside was calm, and there was a constant flow of striped buses shoveling weary arrivals to their hotels. We hopped on our bus and peered out half eyed at the alien terrain at eighty kilometers an hour. For forty minutes I was confused about the world zipping by. Mostly green, pock marked with deep black volcanic rock and oddly arranged pillars of stones in areas I couldn't imagine held any humanly significance. It was a vast horizon, quiet, with mildly dirty clouds lounging just over the barren earth. The ride was quiet and efficient, and our driver had a good memory to create a route around Reykjavik and deposit each of us at our lodging.

Our hotel was unassuming at best, dingy in truth. At around 10:00 we found ourselves walking up some concrete stairs and being buzzed into an abandoned building. There was a humble waiting room draped in ancient carpet, oranges and reds, eastern bloc style. One short hallway slit the building in slyly molded tiles, but stood dark and vacant. We waited, occasionally venturing into an adjacent room, sheepishly calling out "hello". No one. I wandered up to the second floor, uneventfully, and finally hiked up into the attic, where a few eastern Europeans were eating a strangely Russian looking breakfast. Here, we learned, our room wasn't ready. They asked if we would head to the city for a few hours. Exhaustion was making me dizzy. Maybe motion sickness. The aging cheese slice and egg ring buffet wasn’t helping.

Our first contact with the third most expensive city in the world was rather bland. Rather bland. The town was asleep and hadn’t coughed off the morning fog. We wandered down towards the docks, back across select busy streets, and passed a few people that seemed to be walking with purpose. We were lost in the moments, not exactly sure where or what to do. Damn it, I was pissed our room wasn't ready. I needed sleep.

At night, the world looked much different. Light, yes, light at night. So many cosmopolitan dining options, costing so many kroners. The dollar is dying quickly. After hiking a bit through a now wildly stirred awake city, up shopping districts and through oddly familiar looking marketplaces we settled to dine at a three star fish buffet. Fish, right? Seems obvious, but ours was less than ideal. Maybe differences in culture, but everything seemed under-cooked, somewhere uneasy between sushi and lightly baked. Luckily though, we ate skyr, an nice Icelandic yogurt-like treat, that slowly coated the odd fish aftertaste. The place felt a bit stiff, and the older locals all ate uneasily with impeccable manners. Americans here were silhouetted against the locals, a rather unimpressive feat. After dinner, we used our travel agency provided passes to the "ice bar", and quickly downed shots of brenevin, the national alcoholic drink that tastes like anise, in 10 degree weather, wearing unsanitary bar issued parkas. 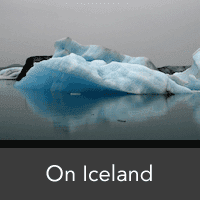 It was still early when we first hit route 1 in our little Toyota Yaris. At first, things felt familiar. Leaving Reykjavik, the world was still a billboard strewn, paved affair. An hour into the ride though, it starting feeling different. Civilization started to fall away into our rear view mirror, shrinking quickly out of sight. Soon, we could see so far in every direction, I started to get a bit nervous. Taken out of my urban cage.

We stopped at a roadside dugout, where their stood a bilingual map. These would quickly become habit. Stretching our legs, we breathed wildly fresh air. It was silent, crisp, and natural. There hadn’t been a car for a bit now, and to our east it seemed like we straddled a different era. Houses once painted in vibrant red or yellow paint, now stood like solitary, angular dissenters against an indifferent countryside. Maybe it was always this way. I started to realize where we were at this point, the isolation started to feel real. At this point, we hadn’t met anyone but the urban, worldly folk of Reykjavik. What would rural Icelanders think of us? What if the car had problems? Apparently, between 2001 and 2004 there were 121 fatal car crashes on Iceland’s unforgiving roads, and 8% were caused by tourists. These facts and questions started to weigh heavily, and somehow this vast landscape felt a bit more confining.

After the first few hours, the roads started to get a bit more unforgiving. We were entering the Snaefellnes peninsula, and this ancient area started throwing dirt and gravel at our auto. Suddenly there was lava fields surrounding us, and the once flat land starting rising up around in a magnificent glacier. This was really starting to feel adventurous. We kept driving on, and it became apparent this road was at the mercy of terrain. There was green and moss looking growths, spiked with giant block rock, magnificent views that sometimes bent the road up high enough to give us a splendid peak around the coast.

On the road, pretty miraculous. By about the third day, things became more settled in my mind, and I began to appreciate the isolation. The car sputtered and coughed up mountains, sometimes in the wrong gear, winding up around fjords and clinging for life against the mountain shoulders. At times we drove with music, a random collection that seemed to focus at times on the Police, but quickly lost interest. Something about it felt right. Sometimes, heavy metal that would slowly pull Marina's hands to her forehead in little circular temple rubs. It helped me though, through the occasionally longer jaunts when my body still kept time with Chicago. There were small towns, sometimes with gas, and amiable people who spoke English as if it were a worn out novelty. It was comforting.

We hiked for miles each day, sometimes to waterfalls that forced what seemed like the entire country's water supply fell over their backs, sometimes through volcanic rock or steaming desert, sometimes in the presence of mammoth ice formations, and once up a volcanic crater. It was that which stands out most in my mind. That alien black mountain, silently humbling its few ambitious visitors. I still feel it, hiking, as we slowly parted with oxygen on an upward bent that shrunk terrestrial people to the size of flies. That morning was misty, and a small hat of fog hovered just above the rim, as we stood for eternities starting at a land we may not see again.

There was much more, so much more, and in my mind, a palpable personal change. Time will tell if any of this holds up. For now, this page is starting to feel like words, words that are a bit to relatable.

My whole life, I’ve found it very hard to passively enjoy most anything artistic. Enjoy in the sense that somehow I don’t interpret it as some divine calling to me to create. To just appreciate withou

270
From a middle chapter

When someone you love dies, your current language expires. First thing to go is the tongue. Then, all treasure you buried rots. And curse the man who seeks to plunder, for they were spoken for. When s

230
Some scribbles from New Orleans

Friday, April 14, 2017 Bourbon street, one long back alley. Bring out your dead, your proud heathens, and your wound up weary travel toys. Bubbles logged in the fetid air, from unseen windows, despera